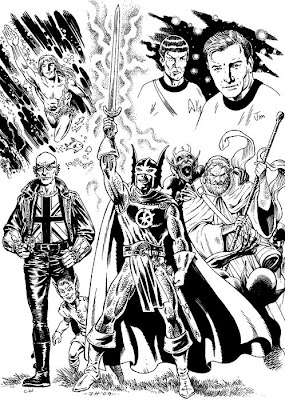 This art was drawn for John Stokes 's 70th birthday
I drew the Black Knight with his elf and Fishboy plus penciled Kirk and Spock which where inked by my brother Jim , King Mob was drawn by Chris Weston and Father Shandor and the demons where drawn by Barry Kitson
Chris, Barry and I have all had our work inked by John over the years he always adds to the art always adding more detail and makes the work look even more fantastic

John has been a comic artist almost 50years now he still loves the medium and is currently drawing and colouring his own work for Classical Comics on The Importance of Being Earnest by
Oscar Wilde http://www.classicalcomics.com/books/beingearnest.html

Panini U.K have been reprinting his fantastic work on the Black Knight/ Captain Britain in collected editions
http://www.amazon.co.uk/Captain-Britain-Vol-3-Lion-Spider/dp/1846534011

John Stokes is a master craftsman and a wonderful friend
Posted by jon haward at 03:56