CAPTAIN BRITAIN, SPIDER-MAN VS THE FURY 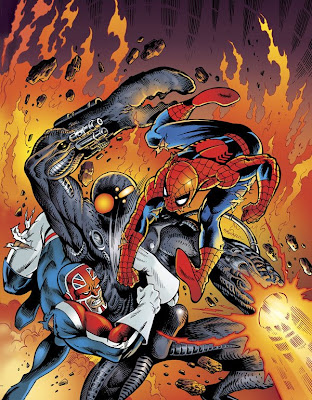 Sad to hear that the new-ish version of Captain Britain comic Captain Britain and MI:13 has been cancelled by Marvel U.S , shame as he's a great character and i've just started to read the new stuff via tpb ,

this is one of my favorite covers drawn for SPECTACULAR SPIDER-MAN ADVENTURES for Marvel u.k /Panini u.k ltd issue 133 published 2006, it was special for two reasons one it had the heroes fighting the Fury a character created by Alan Moore and Alan Davis and second i got my pencils inked by John Stokes a classic Captain Britain artist, also the colouring was by John Charles a good friend and terrific artist.

the story was great to draw as well written by Jim Alexander, one of the rare events where i worked on a title where all the creatives where my friends (warm fuzzy moment) that issue got a 9/10 review in Comics International , so i guess it showed in the work we where all having a ball working on that issue.