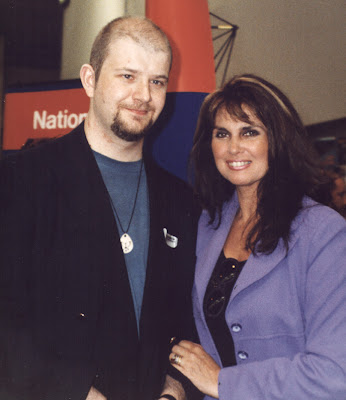 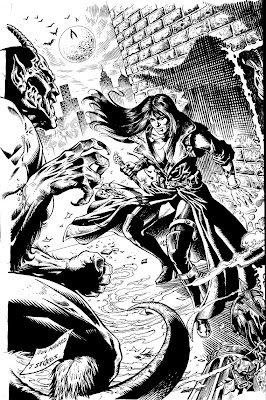 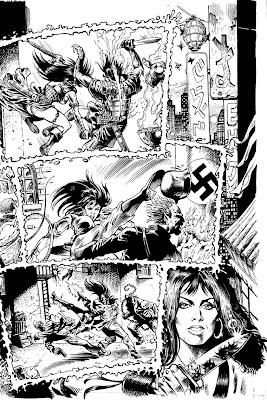 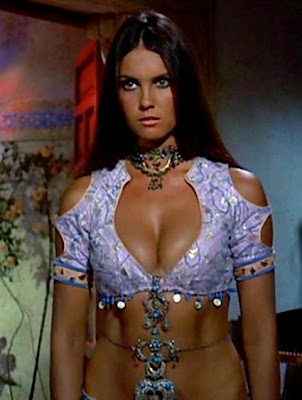 I had the pleasure to meet Caroline at a memorabilia show in birmingham in 1997 we where both guests at the event, she was charming and i admitted i was a big fan of hers since i saw her in the Golden Voyage of Sinbad movie (when i was 10yrs old) anyway i told her i drew comics and also that i designed stuff for theme parks, computer games etc ,i had a brainstorm and said why didn't she have a comic, as most of her career she had played fantasy characters ie at the earths core, hammer films, james bond (the spy who loved me), so we communicated and here is the result .

i asked my friend Jim Alexander to write a two page intro pitch which was the following:

SHE IS CAROLINE MUNRO

FORCES BEYOND OUR RECKONING HAVE BESTOWED UPON HER SEVEN LIVES.

SO THAT,OVER THE GENERATIONS, SHE HAS DEDICATED HERSELF TO FIGHT AGAINST EVIL...IN ALL IT'S MYRIAD FORMS.

SHE HAS HUNTED DOWN THE VAMPIRES OF THE PAST.

SHE FOUGHT AGAINST THE FORCES OF BLACK MAGIC USED BY THE NAZIS.

SHE HAS PITTED HERSELF AGAINST GANGSTERS POSSESSED BY DEMONS.

SHE HAS HUNTED DOWN THE VAMPIRES OF THE PRESENT.

i drew the two page spread and asked John Stokes if he would be interested in inking it , he agreed and did a beautiful ink job on my pencils ,i art directed my friend Dave Alexander to paint a dummy cover and i showed the end results to Caroline and her agent they loved it ,then nothing it fizzled out due to lack of funding.
still it was a great try and it was a fun little project to work on plus it was very cool to meet Caroline and her husband who at the time was trying to get a DR WHO movie made.